Holdcom is dedicated to helping businesses communicate with their customers through sound and sight. Founded in 1987, in the days when the telephone was the most effective business communication medium, Holdcom showed companies and organizations how to leverage this tool with innovative voiceover messaging to inform, engage, and influence their callers. Utilizing the power of the recorded human voice, Holdcom offered the best Message On Hold and Voice Prompt solutions production services available.

Over the years, as business communication has evolved, so has Holdcom, remaining on the cutting edge while staying true to our roots, bringing audio-visual solutions to telephony, the Internet, in-store messaging, video, and emerging digital mediums. We continue to offer the most effective marketing solutions for businesses, backed by the highest level of responsive customer service. 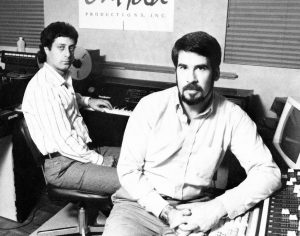 In a time before Holdcom, Neil Fishman, an accomplished pianist and composer, and Harvey Edelman, a lyricist and producer, were brought together by a mutual friend to create an original musical theater work. Their initial partnership blossomed into a number of original musical productions, including an Off Broadway run of On The Air, a musical revue of the Golden Age of Radio.

While writing and producing scripts and scores for musical theater, the team created marketing programs for a variety of clients, including the national Head Start program, Parents Magazine, BMW, General Electric, Colgate Palmolive, and Grey Advertising, to name a few.

Alas continued success in musical theater was hard to come by. As the years ticked away and the bright lights of Broadway grew dim in the distance, the duo changed their direction.  They had always been able to communicate successfully with their theater audiences, making them laugh, making them cry, making them think.  Now they would turn towards a new audience, a business audience, and use their powers of communication to help other businesses reach their customer base, hopefully not making them cry or laugh… unless intended.

It was the dawn of Message On Hold communication… the music on hold electrical circuit itself had only been invented a year or two before – and the duo set up shop to produce Message On Hold programs for businesses.  The duo proved to be a natural for this nascent industry, and through hard work, dedication, and the instinct of putting the customers’ needs first, their business, Holdcom, grew rapidly. With voice production as its center, Holdcom continued to expand and diversify into all areas of audio applications, from telephony, to multimedia, to the Internet… and beyond.

Help organizations elevate their customer experience and promote their brand
through sight and sound with affordable professional digital content.

Be the trusted digital content resource for our clients.